I dragged a Halgofs Leo +-0 down bag over 4000 miles from Anchorage Alaska to Mexico this summer on my touring bike. I didn’t actually drag it; in fact I neatly packed it into one of my rear panniers where it took up a surprisingly small amount of room. So why the Haglofs Leo down bag I hear you cry? (That’s a lie; I don’t expect anybody reading to do so with such enthusiasm, I assume procrastination brings the majority of people here).

I had a sleeping bag based conundrum before I left for Alaska: should I stick with the Haglofs LIM down bag I had used at the Highlander Mountain Marathon or upgrade to something a little warmer at the expense of weight and packable size. I was concerned that night time temperatures in the north section of my trip may drop below zero having researched it online but was also aware that the LIM down bag would be more than satisfactory for America’s lower 48. I paid a visit to Gus of Gearpest in Aberdeen and he soon had the kettle on and various options spread out on the floor. I ended up erring on the side of caution and going for the Leo which comes with a roll-top waterproof compression bag, nice touch. The weight difference between the Leo and LIM down bag is just under 200g for a 195 cm bag (packable size Leo – 16 x 27 cm compared to 15 x 18 cm for the LIM down bag) so we’re not talking a huge increase in bulk for a few extra degrees warmth.

Within the first few weeks of cycling through Alaskan and Yukon wilderness I was glad I had chosen the Leo. Night time temperatures dropped as I expected and the bag performed to the edge of its temperature range. I had one particularly memorable night’s sleep in a Yukon government campground near Destruction Bay. Two lads I met cycling and I had just rolled up to our planned camp for the night after a gruelling 80-90 mile day on heavily laden bikes tormented by fierce headwinds. We were met by a security barrier and sign reading: “Bear in Area: Campground closed”. After a brief discussion we identified that there were no other campsites nearby and that in this area, bears were everywhere, so what did it matter where we camped? The diming light found us sneaking past the barrier and trundling towards the abandoned campsite, singing with shakey voices to let any bears in the vicinity know we were about to interrupt their summer-camp (Discussion point: if you were a bear watching a scrawny Scottish lad on a bike cycling past singing Marvin Gaye’s ‘sexual healing’, what would you do?). Dinner was heated over roaring stoves with a can of bear-spray parked within reaching distance, constantly glancing around in fear of a tip-toeing bear. As time elapsed so did our fear and we had soon commandeered one of the camp huts which in the Yukon contain a large metal wood burning stove. We threw wood into it until the sides glowed an angry red, free from the possibilities of over-officious park wardens or fellow campers tutting in disapproval. That night I unrolled my sleeping mat and bag and slept next to the stove, a light breeze bringing a freshness to the night which a tent usually blocks. It was one of the best night’s sleep I’ve had and I woke more comfortable than a pig in a mud-hole.

I don’t think there is much point in going into the technicalities of the bag. One of its endearing factors to me was its simplicity. It hasn’t been overdesigned with simple elastic drawstrings and enough room to wiggle about in during the night. It also has hang loops at the foot end, if the bag felt damp at all I often hung it up to air on a branch or twig.

One piece of advice I would have for prospective cycle tourists is don’t be overly concerned about weight. If you’re on the road for a long time comfort has to be built into the equation and increased comfort often means increased weight. For example I swapped my Spork for a metal knife, spoon and fork within a few weeks of setting off having become sick of preparing and eating meals with a flimsy shard of plastic.

I’m almost ashamed to admit it now but I made a snap decision to leave my sleeping bag liner at home the day before I set off because……..I thought the weight saving would be worth it. Of the 90 days I spent cycling over 80 nights were spent in the sleeping bag. Some nights I would crawl exhausted and covered in the residues of the days sun cream and insect repellent straight into the bag, not because of a predisposition for grubbiness but because sometimes I left settling down for the night too late or couldn’t find a lake to jump in. By the end of my trip the sleeping bag smelt like the inside of an old man’s pocket. Happily the stench washed out easily when I got home and I now intend to use the bag at this year’s Original Mountain Marathon. 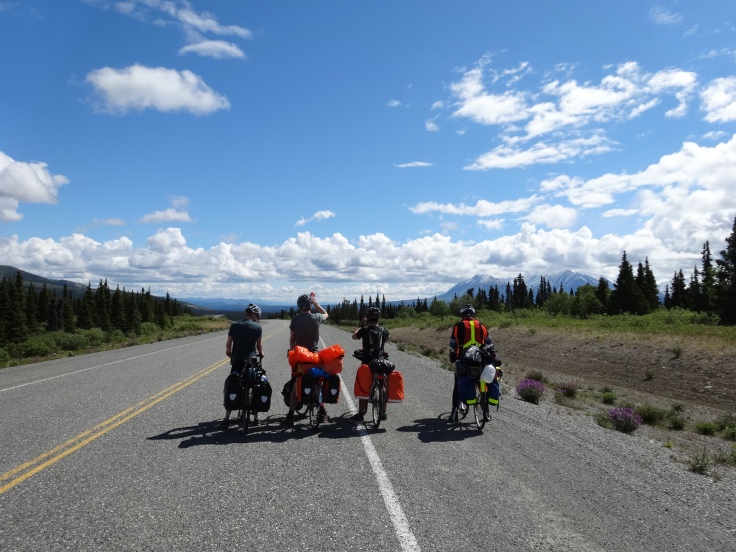